In the 1800's and early 1900's land use in the Athens area primarily focused on farming. Aerial photography dating back to the 1930's shows a drastically different Athens with open swaths of farmland and drastically less tree cover than today. By 1935 Congress recognized that "the wastage of soil and moisture resources on farm, grazing, and forest lands . . .  is a menace to the national welfare" and established the Soil Conservation Service (SCS) as a permanent agency in the USDA.

In Athens, this "wastage" had led to major flooding not only along the North and Middle Oconee Rivers but also along major tributaries such as Sandy Creek and Trail Creek. Frequent flooding destroyed the protective vegetation along the creeks allowing them to move dramatically over time as they eroded away their banks.

In 1954 the Watershed and Flood Prevention Act was passed by Congress enabling the SCS to partner with localities to create watershed management plans and build flood control structures. An application by Clarke, Jackson, and Madison counties for a watershed project involving 28,000 acres would be approved by the Soil and Water Conservation Committee in 1964. This project would create a flood-control lake on the border between Clarke and Jackson counties named Lake Chapman in honor of Cecil W. Chapman, a retired state conservationist who championed this project (Athens B.H., 1981).

Although approved, difficulties with land and easement acquisition would delay construction of the dam until 1976. Completed in 1977, the dam formed a flood-control lake with a normal pool of 260 acres and is designed to double in volume during flood events swelling the lake to as much as 400 acres to slow flood waters and protect both Sandy Creek and Athens..

An article in the June 7, 1964 edition of the Atlanta Constitution titled "Park and Lake Looms for Athens" noted that the project would benefit local farmers and landowners in the watershed by reducing flood damage and controlling erosion.

Construction of the dam and land purchases were funded on and 87% federal/13% local basis with local funding coming from a 1968 bond issue. As the project evolved, the recreational possibilities associated with the project were recognized and the SCS entered into a 50-50 partnership to construct the park and it's amenities. The SCS provided the materials and park designs (leading to the close similarities to national and state park facilities) while Clarke County provided machinery and a large force of inmate labor to construct the park.

A June 11, 1981 article in The Red and Black by Ross Bodle--"$4 million Sandy Creek Project Proceeds" details that $2 million of the $4 million project total was spent on construction of the dam with $415,000 spent on property acquisition. 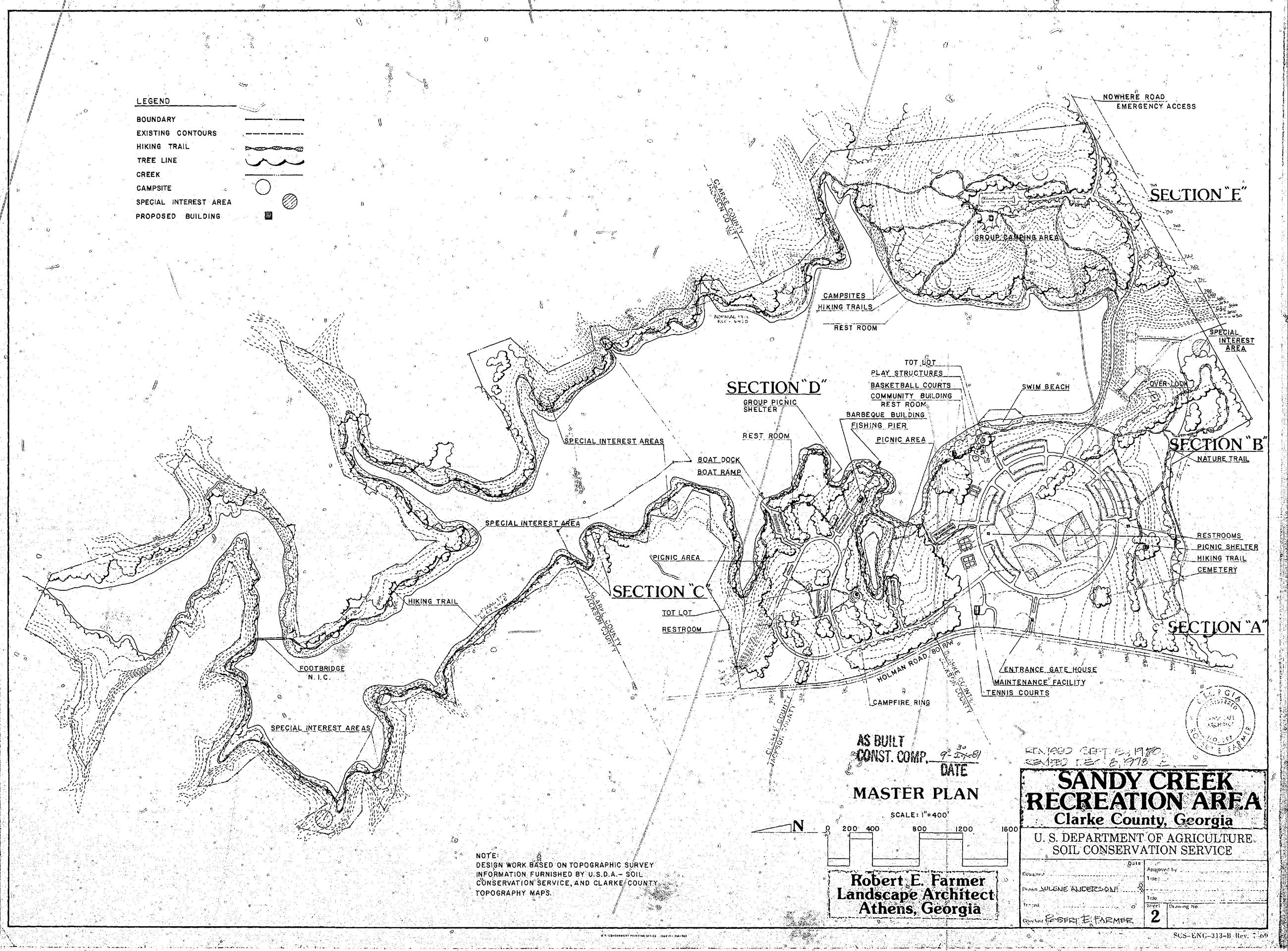 Opening day for the park, originally planned for Labor Day 1981, was pushed back to October 15 of the same year, due to concerns the large anticipated crowd would require further preparation of the grounds and staff (Ready, 1981). At that point the 635-acre park was the result of two decades of planning and work by the local government, the SCS, and the residents of the Sandy Creek Watershed.

When the park opened, there were picnic areas, some trails, a boat ramp, and a community building (now Pavilion 1), while the baseball diamonds, tennis courts, and swimming beach were still under construction (Ready, 1981). The recreational facilities were met with great excitement with Mayor Julius Bishop stating, "no longer would Athenians have to drive so far to reach a well-developed water based recreation facility."

In 1981, Sandy Creek Nature Center made a pre-application to the Georgia Department of Natural Resources to acquire grants for a "Greenway", which would connect the nature center and the park (Bodle, 19B1). Funding for this project came from the Land and Water Conservation Fund through the Georgia Department of Natural Resources, Parks, Recreation and Historic Sites Division, and the Clarke County Board of Commissioners and added over 400 acres to the park land.

Initial development of the trail was accomplished with the help of many volunteers and Department of Leisure Services' staff. Named Cook's Trail in honor of Dr. Walter L. Cook, Jr. who tirelessly worked on the project, this 4.1 mile trail is still in use today.

In 2000, a 7.4 acre tract of land was purchased from the Oconee River Land Trust and added to the land surrounding the lake. Located where Sandy Creek enters Lake Chapman's northern end, the addition is an important wetland acting as a filter for water pollutants and flood basin control (Shearer, 2000).

A new Disc Golf Course at Sandy Creek Park opened in March 2006 with then Mayor Heidi Davison. Disc Golf remains a popular activity at the park with volunteers working to maintain the course. 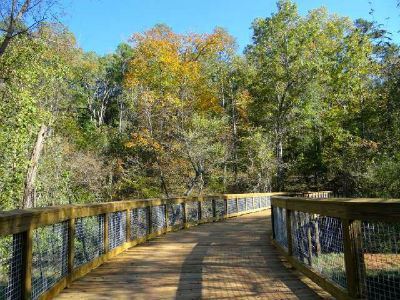 in 2013 a boardwalk was constructed to join the two hiking trails on each side of the lake over a section of the wetland acquired in 2000. This boardwalk completed what is now known as Lakeside Trail closing the loop originally envisioned in the park's design.

Recent efforts have focused on updating and maintaining the park's 35+ year old original facilities and infrastructure. Work to repave the roadways, install new wayfinding signage, replace trash cans and picnic tables, and rebuild handrails and stairways was completed in 2016 and 2017.

Additional projects are planned to replace the original wooden fishing pier with three new floating fishing docks and to rehabilitate all of the park's Dog Parks.

Today, Sandy Creek Park includes over 1,100 acres of land with over 125 facilities, and sees over 110,000 visitors annually. Families and individuals rent the park facilities for picnics, birthday parties, and reunions or just drop by to swim, paddle, or hike. Special events, educational programs, summer day camp, and programming like our Friday Night Paddles or Beach Yoga offer even more reasons to visit and keep Sandy Creek Park active year-round.