At the southern end of the property, adjacent to Walker Hall, lie the ruins of a brick factory that operated in the early 1900s. Claypit Pond was actually created as a result of dredging clay used to make the bricks at this factory.

The factory made more than 25,000 bricks per day using a "tunnel kiln" patented by Frances Shaw in November of 1913. Rights to the process were assigned to the Shaw Kiln Co. of Atlanta later that year. The factory, which employed about 25 people, may have been the first to use this process.

The Shaw process enabled a factory to make glazed bricks as well as rough ones. It took about a week for bricks to be dried and baked in the tunnel kiln. There is some evidence in the rubble that this factory made bricks for other companies.

The furnace was located near the road, probably where the "walls" are. The kiln may have spanned from there to the rubble pile. The dryer, which was about 90 feet by 5 1/2 feet and 3 1/2 feet tall, ran from the rubble pile to the little bridge. Bricks were stacked at the opposite end of the furnace, and heat was pumped through flues in the floor of the dryer and the kiln. The kiln, approximately 6 feet by 6 feet by 300 feet, probably had a slight incline from the loading end (east) to the unloading end. 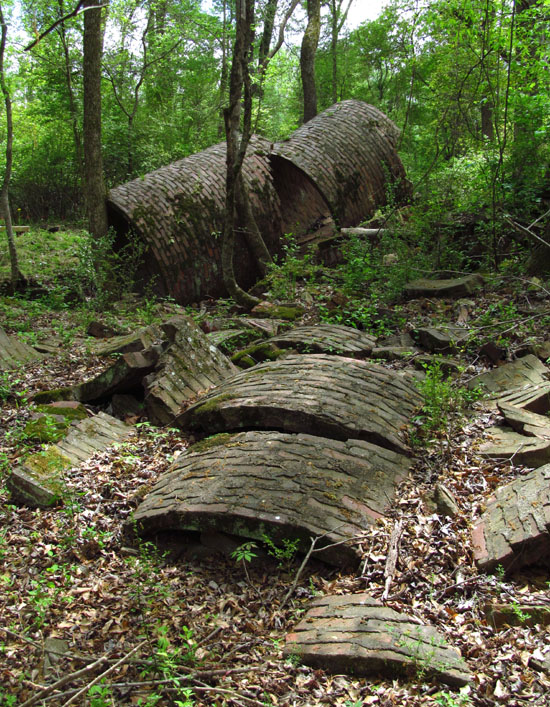