When settlers first arrived in the Georgia piedmont, they crossed a variety of landscapes: forests, wetlands, and prairies. Though the forests and wetlands remain, the piedmont prairie is almost a forgotten scene. Piedmont prairies are grassy areas scattered between forests, usually occupying about 20- 50 acres. They are havens for wildlife, proving food and cover for animals such as quail, deer, turkey, and many species of songbirds. These prairies are different from their Midwestern counterparts because trees are scattered throughout the grass-covered landscape.

Over time, most piedmont prairies have been destroyed as a result of habitat changes and the introduction of exotic plants. In the past, frequent wildfires and grazing animals like bison and deer helped prevent large woody species from growing and blocking sunlight needed for many prairie grasses and flowers to grow. The suppression of fire and displacement of the large grazers has fundamentally altered the landscape. In an attempt to save these valuable areas, restoration efforts are occurring throughout the Southeast. The piedmont prairie at Sandy Creek Nature Center was created to provide a varied habitat and to offer educational experiences. 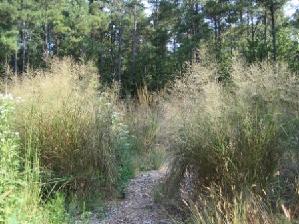 When you visit the nature center, look to your right as you pull into the Education & Visitor Center parking area. The quarter-acre site is in its beginning stages, but already changes are visible. Below is a timeline of our developing prairie: