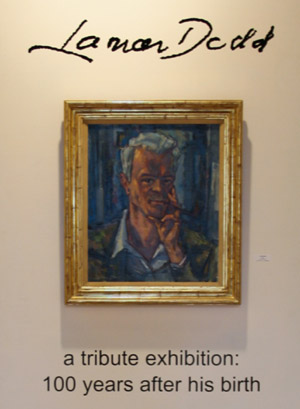 Lyndon House Arts Center presented "Lamar Dodd: a tribute exhibition 100 years after his birth," featuring work from the collections of C.L. Morehead Jr. and Annie Laurie Dodd. The exhibition presented a varied body of styles, from very early works to paintings from his last series.

Dodd is well known as being the creative force behind the University of Georgia (UGA)Department of Art - he spearheaded its foundation in 1940, became department director at the age of 27, and served in that post for many years. Dodd helped create a contemporary southern art movement where none previously existed, and in 1996 the UGA art school was renamed the "Lamar Dodd School of Art."

The artistic talent of Lamar Dodd, born in Fairburn, Georgia on Sept. 22, 1909, was noticed early. In the sixth grade he was allowed to take art lessons in LaGrange. He moved to New York in 1928, and was educated at the Art Students League there. Lamar Dodd studied both the Ashcan School and American Scene modes of painting, beginning a pattern of stylistic changes that he would follow throughout his lifetime. Dodd would never wholly abandon representational art, but the work he did for NASA in the 1960s and 1970s and the Heart Series in the 1980s are among the most abstract of his career.

Lyndon House Arts Center is very grateful for the generous assistance given by his widow, Annie Laurie Dodd, and longtime Dodd collector C.L. Morehead in mounting this exhibition. The exhibition was seen in the upstairs South and West Galleries.