There Again: Print Installation by Jon Swindler and Michael McFalls

“There Again”, is a new site specific installation created especially for the Arts Center, by artists Jon Swindler and Michael McFalls. Please join the artists for a gallery walk and conversation about their work, process and collaboration on Saturday, August 6th at 2:00 pm.

Michael McFalls and Jon Swindler began working collaboratively in the winter of 2015 in preparation for an exhibition in Sweden at the University of Gothenburg, HDK Steneby. With that exhibition the artists sought to examine the very nature of collaboration. They produced works remotely, and in advance of the on-site installation, via digital file sharing and autonomous studio production. Their efforts were combined in the exhibition titled “From Here to There,” which consumed a massive gallery with site-specific printed and sculptural works. The second permutation of this work was installed at Marcia Wood’s Canterbury space last January in an exhibition titled “Here Again.” In that version, remnants from the previous exhibition were combined with elements/materials from each artists’ individual studio practice and featured a massive, composed pile of materials that served as both repository and resource for the installation. For the exhibition at Lyndon House Arts Center, Mike and Jon have incorporated elements from previous collaborations in addition to new works, created on-site. In this exhibition titled “There Again” they acknowledge and manipulate the role “the multiple” plays in both of their practices, Mike as a sculptor and Jon as a printmaker. This third manifestation features a combination of discreet works as well as large site-specific installation incorporating a variety of media.

Michael McFalls received his B.F.A. in Fine Arts from the Columbus College of Art and Design (OH) and his M.F.A. from the University of California at Davis. He is currently an Associate Professor of Art at Columbus State University. McFalls recently completed a six-month Fulbright Fellowship in Sweden at the Univeristy of Gothenburg, HDK Steneby and has received numerous scholarships and awards including; the Pitzerker Foundation Endowed Fellowship. He has been a resident at Sculpture Space, Inc., The Djerassi Resident Artists Program, and Australia National University, and a visiting artist at Dartmouth College and Furman University.

Jon Swindler is Area Head of Printmaking and Book Arts at the Lamar Dodd School of Art at the University of Georgia. He holds a BFA in studio art and art education from Fort Hays State University in Hays, Kansas and an MFA at Southern Illinois University in Carbondale. Over the last several years he has exhibited his work in numerous solo, competitive and invitational exhibitions both nationally and internationally. Jon has also performed visiting artist workshops and lectures at various institutions, including: The Art Academy of Cincinnati, HDK School of Design and Craft in Steneby, Sweden and the Society of Northern Alberta Print Artists in Edmonton, AB, Canada. 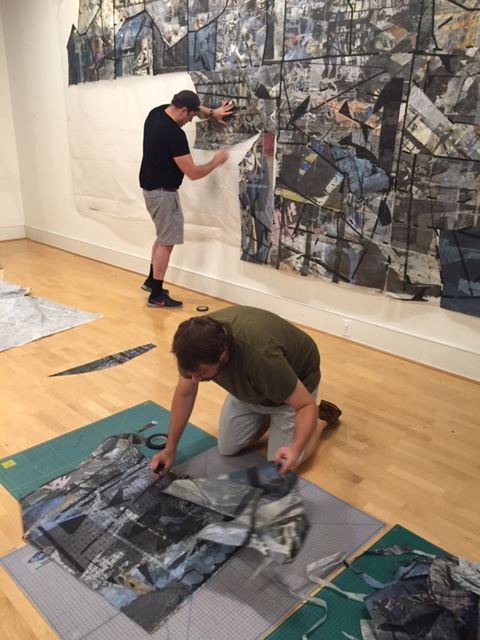